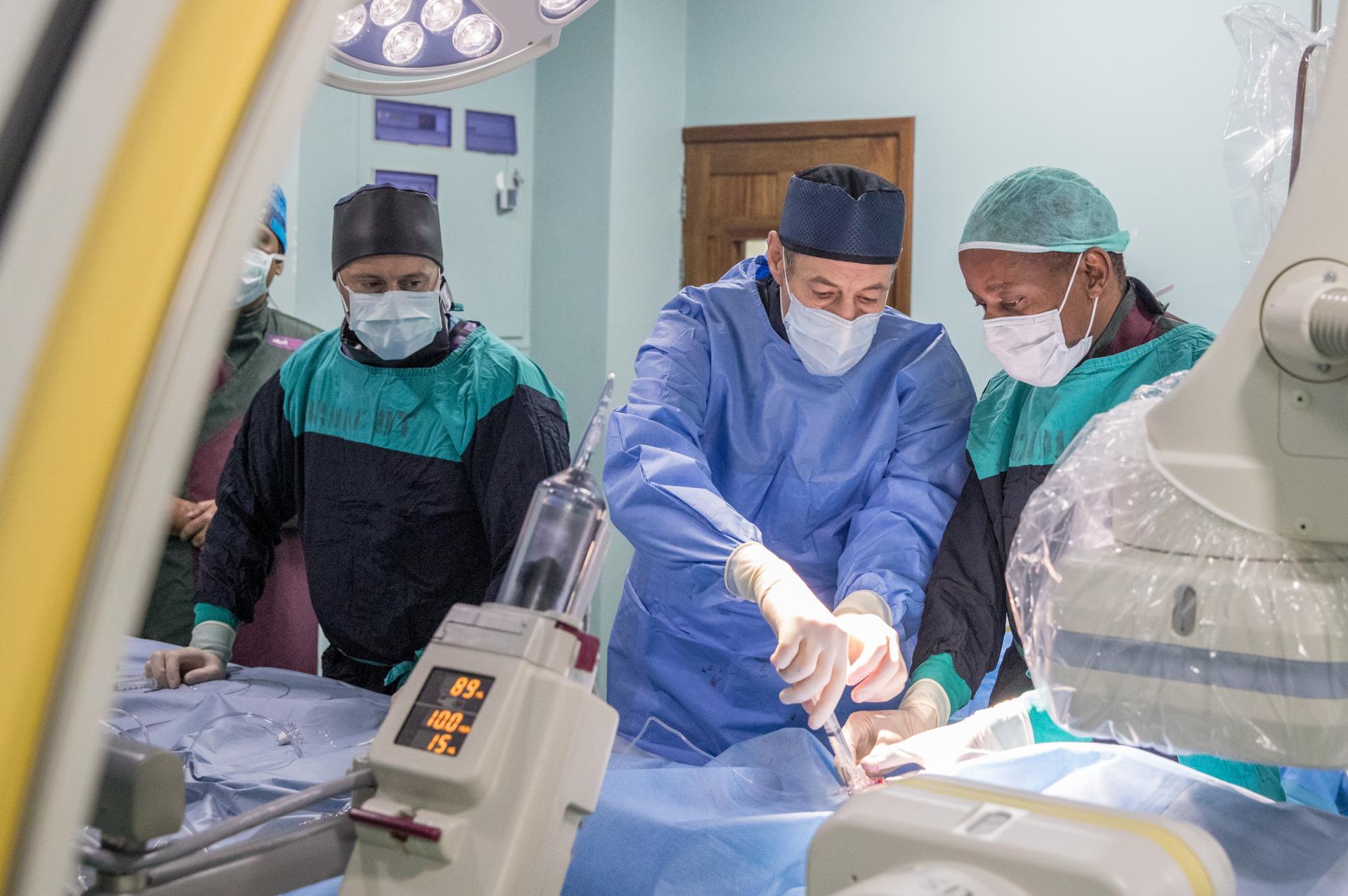 The first Israeli-German joint medical mission travelled to Dar es Salaam in Tanzania in November 2016. The German team from the Deutsches Herzzentrum in Berlin under the leadership of Prof. Felix Berger and the Israeli team from the Wolfson Medical Center worked alongside our Tanzanian partners at the Jakaya Kikwete Cardiac Institute performing lifesaving catheterizations and diagnosing children with heart disease. The mission was a successful one, with 14 children undergoing catheterisations, paving the way for future cooperation between Save a Child’s Heart and the Deutsches Herzzentrum with major achievements in training our Tanzanian partners.The Save a Child’s Heart (SACH) team arrived in Dar es Salaam late at night on October 31 and after a few hours of sleep headed to the Jakaya Kikwete Cardiac Institute (JKCI). The Tanzanian team at the hospital warmly welcomed the SACH team; Dr Godwin Godfrey, Tanzania’s first paediatric cardiac surgeon trained by Save a Child’s Heart in Israel and Dr Naiz Majani, paediatric cardiologist also trained by Save a Child’s Heart in Israel led the Tanzanian team.Outside the cardiology clinic, there was already a line of parents and children waiting to be examined by the medical team. Dr. Akiva Tamir, head of the pediatric cardiology unit, and Ms. Nava Gershon, head nurse of the pediatric surgical ward at the Wolfson Medical Center (WMC), began to screen children together with Tanzanian pediatric cardiologist, Dr. Naiz Majani who trained with SACH in Israel and is now leading the pediatric cardiology unit at the JKCI. Outside the clinic room, Save a Child’s Heart Board member and photographer Debra Silver entertained the children; giving them balloons and games and taking pictures of the children and parents.The Tanzanian cath lab team immediately began unpacking the boxes together with the head nurse of the WMC cath lab, Svetlana Katsovich and WMC’s anaesthetist Dr. Dmitry Tryhub who began preparing the room for the first procedure.In the Pediatric Intensive Care Unit (PICU) nurses Orit Ben Coresh and Lena Moshayev together with Tanzanian PICU physician, Dr. Vivianne Mlawi unpacked the boxes and prepared the recovery beds for the first children. Dr. Mlawi is currently training in Israel and joined the mission at her hometown hospital.

The second day of the mission began with a lecture session in the conference room of the JKCI. Dr. Tamir, WMC paediatric cardiologist, Dr. Sagi Assa, Svetlana Katsovich and Nava Gershon gave lectures on various issues related to paediatric cardiology and catheterization. Immediately after the lectures the teams returned to their departments and started working. The first patient to undergo catheterization that day was eight-year-old Anna. Dr. Assa performed the catheterization with the Tanzanian cath lab team.The procedure went well and Anna was brought to the PICU for recovery. One more diagnostic procedure was done that day and the German team, led by Professor Felix Berger arrived in Tanzania later that evening.

On the third day of the mission the Israeli and German teams woke up early this morning and headed to the hospital to start their first working day together. Professor Mohammed Janabi, director of the JKCI, personally welcomed the German team and showed them around the hospital. The first patient today was three-year-old Mariam. Mariam is a sweet little girl who came to the hospital with her mother. They had to travel for eight hours in a bus to reach Dar es Salaam. The procedure went well and Mariam was brought to the PICU for recovery.Later that day, Israeli Ambassador to Kenya and Tanzania, Mr. Yahel Vilan, visited the hospital and met with the Israeli and German teams. Ambassador Vilan visited the PICU and cath lab and expressed his support for the humanitarian activity of SACH. In the evening the teams were invited to a dinner reception at the residence of Deputy German Ambassador to Tanzania, Mr. John Reyels.

Three catheterizations were performed on the fourth day of the mission and many more children were screened and diagnosed at the cardiology clinic.Among the children waiting in line to be screened, we found six-year-old Dismas sitting quietly with his mother, wearing his best clothes and smiling constantly. Dismas was brought to Israel two years ago by Save a Child’s Heart to undergo life-saving heart surgery at the WMC and today he came for a follow-up examination. The doctors were pleased with his condition and his mother told the team that since they returned from Israel, Dismas had been doing well. He has started to attend school and he loves playing with his friends. He has no difficulties in running and playing and he is really like all the other children. Dismas’ lifesaving surgery was sponsored two years ago by the German foundation Ein Herz für Kinder and the German filming crew who were documenting our medical mission held a long interview with Dismas’ mother and filmed the happy child in order to show the foundation the impact of their donation on the little boy’s life.Later that day, Dr. Tamir, Nava Gershon and SACH Executive Director, Simon Fisher left Tanzania and flew to Kenya where they were scheduled to hold a clinic to diagnose children with heart disease. The three were welcomed in Nairobi by SACH Kenya representative, Ms. Rina Attias and during the two-day clinic, they managed to screen 62 children in need of heart surgery.Meanwhile, in Dar es Salaam the day finished with a special dinner hosted by Prof. Janabi, in one of the city’s top restaurants. Israeli, German and Tanzanian team members enjoyed the dinner and had a chance to socialize and spend a nice evening together.Four catheterizations were performed today. All the children who underwent procedures during the past few days were recovering nicely. Little Mariam was moved onto the ward for further recovery and at the end of the day, before heading to the airport for departure, the medical teams and the children treated during the week came together for a happy group photo.