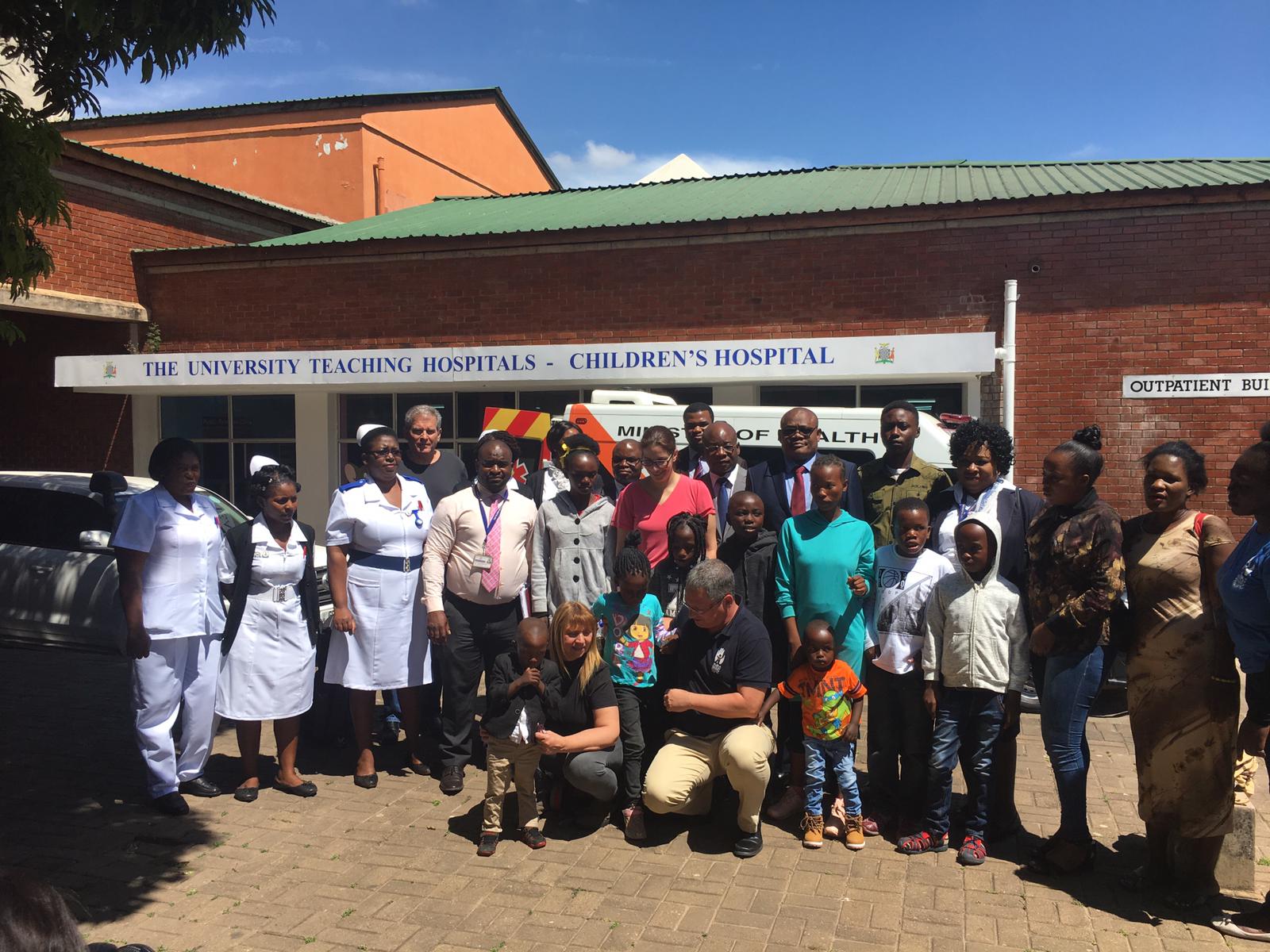 In two days in Addis Ababa, Ethiopia, the team screened 44 new children together with our partner from the Black Lion Hospital, Dr. Etsegenet Gedlu, a pediatric cardiologist who received advanced training in Israel at Save A Child’s Heart at the Wolfson Medical Center, to determine which cases would be selected for future care in Israel.

‍On day two the team was joined by US Co-President Dr. Jeff Hoffman to visit the Cardiac Center of the Children's Fund of Ethiopia (CHFE). The building is located on the grounds of Black Lion Hospital but is independent of it. The center was established in 2009 by Dr. Belay Abegaz, an Ethiopian pediatric cardiologist and one of the founders of pediatric cardiac activity in Ethiopia. There, the team met with Dr. Helen Befekadu, who was recently appointed medical director of the center after returning from internships in Canada and England in pediatric intensive care units. The team learned about the challenges facing the center, including lack of funds to finance the purchase of consumable medical supplies, medications and salaries suitable for staff. Currently, most of the center's activities are based on donations of supplies and medications from organizations sent by delegations from the United States, Canada, England and Israel.

The objective of the group was to speak about collaboration with CHFE and Dr. Yayu Mekonnen’s return to Ethiopia after 5 years in the medical training program in Israel at SACH in pediatric cardiac surgery, and an additional 18 months of a fellowship at the Royal Children’s Hospital in Australia. Dr. Yayu will begin work at the center in May in coordination with the Ministry of Health and St. Paul’s Hospital in Addis. The Ministry of Health has committed itself to providing the center with consumables and a budget, but the process of tenders and procurement is delayed. Dr. Hoffman asked for lists of supplies with the intention of procuring them for the center, which will cover 100 heart surgeries for children and allow Dr. Yayu to begin work immediately upon return. The team also discussed a prospective surgical and catheterization mission for November 2019. Notably, the Ministry of Health is working to establish several additional heart surgery centers in Ethiopia, which are expected to open in 3-10 years, and will continue to recruit students to study abroad in India, South Africa and Israel for medical training.

In the same day, the team met with Ethiopian Minister of Health, Amir Aman who pledged his commitment to support pediatric cardiac care projects on the ground in Ethiopia and expressed his appreciation for the collaboration with Save a Child’s Heart. Later that evening, the team was received by the Israeli Ambassador to Ethiopia, H.E. Mr. Raphael Morav, and his wife Therese in his home for Shabbat dinner together with Dr. Zerihun, special advisor to the Ethiopian Minister of Health, Dr. Wendgemagn, Provost of St. Paul’s Hospital and Dr. Helen, Medical Director of the CHFE. It is expected that this collaboration between the various parties will lead to the creation of the first fully-functioning Center of Excellence and training for pediatric cardiac surgery and care in Ethiopia in the coming year.

A highlight in Ethiopia was seeing former patient, Kiristian Dessalegne Sebesebe. In July 2016, the Save a Child’s Heart team met Kiristian on a medical screening mission at the same location - Black Lion Hospital in Ethiopia. When Save a Child’s Heart chief cardiologist, Dr. Akiva Tamir evaluated her, he realized that her condition was so critical that she needed immediate treatment so he decided that the team would escort her back to Israel within the week. Three years later, and we are grateful to see Kiristian doing well at the clinic! A total of 4 former patients were followed up with in Ethiopia.

During the second part of the mission, the team flew to Zambia where pediatrician, Dr. Agnes Mtaja and pediatric cardiologist, Dr. John Musuku prepared patients for the clinic at the University Teaching Hospital Children's Hospital in Lusaka. Once on the ground, resident Dr. Nawa Kalima assisted Dr. Shai and Nurse Gershon to screen 40 children.

On the way to the clinic, The SACH team passed through the echo room where they met representatives of the Italian organization Bambini who were also working alongside Dr. Agnes, to schedule a delegation of medical professionals to perform life-saving procedures at the hospital the following week.

In 2017 Save a Child’s Heart signed a memorandum of understanding (MOU) with the Zambian Ministry of Health, expressing its’ commitment to funding 20 operations each year in Israel, training of a group of local doctors and medical personnel and facilitating cardiac and surgical missions to Zambia. Dr. Daniel Makawa, a representative of the Ministry of Health who is in charge of administering the MOU came to greet the team on site. In light of the MOU, to date, 13 children have been operated in Israel and one heart surgeon, Dr. Mudaniso Ziwa, has arrived in Israel to begin training.

At the clinic on Saturday, the team worked with Dr. Musoko, two interns and nurse Dvora Benda, who until recently has been in Israel as a chaperone for the Zambian children being treated by Save a Child’s Heart. We were excited to see 11 former patients including Ngoza Tembo who was treated in 2018 and Luyando Kaumba who just returned from a life-saving surgery in Israel last month.

At the time of the examination of the tenth patient, the Permanent Secretary in-charge of Health Services, Dr. Kennedy Malama, met with the staff at work and received an overview of the organization's activities in Zambia since 2017. He urged the University Teaching Hospital staff to be proactive in efforts to make the institution sustainable.

Then, a press conference was organized by Dr. John Musoko, Director of the University Hospital, the Director General of the Ministry of Health, and Simon Fisher in the presence of the hospital staff, the children and their families. The parties expressed their mutual commitment to the success of the plan and to the MOU while promoting relations between Israel and Zambia.

In just four days a total of 99 children were examined, and all follow-up tests showed that the children formerly treated in Israel have recovered and are developing well. Save a Child’s Heart is grateful to our dedicated team and partners on the ground in Ethiopia and Zambia for their hard work and partnership in our life-saving mission.